I’m excited to announce that a first draft is almost complete. And, it’s all because I returned to handwriting my manuscript. There was a point where I couldn’t hold a pen. The doctor confirmed my suspicion: Carpal Tunnel.
I started writing seriously (as in, hey, I’m going to write a book) in roughly 2005. I wrote with pencil on lined paper. That’s what I had at the time. Then, I transitioned to pen and blank computer paper because ink is easier to see than graphite.
At first, I wrote rather large with decent spacing between each line. Then, my writing got smaller. Words crowded the page. Pens sacrificed their ink quickly. I started using whatever pen I had in arm’s reach. Sometimes, those pens were cheap stick pens. They cramped my hand.
Until late 2016, I wrote prolifically. Novels, short stories, flash fiction, articles for others. With the exception of these blog posts, all those were handwritten first.
All that handwriting caught up to me. Pain and numbness. I had to abandon my process. Typing drafts happened, although it doesn’t flow the same. Still, words appeared on the page.
Pain has been my fiddly companion for decades. I injured my knees about a week after my sixteenth birthday. Pain comes and goes, but is manageable. And, I know when it’s going to rain and how heavy it’ll be.
The pain doesn’t bother me. I can live with a little pain. However, I will say this: Pain is the indicator when something is wrong. Do not ignore pain.
The loss of strength concerned me. Not just in my hand, but in my entire arm. Actually, concerned is a poor word choice. I should say scared me.
Now, I did not get surgery. Not yet. I wanted to see if I could heal. Surgery, for me, is a last resort option.
The first thing I did was stop. I stopped carrying heavy things. I stopped any movement that hurt me.
The second thing I did was change how I did things. My old, regular computer mouse hurt my hand and wrist. I bought a vertical mouse. It immediately relieved my hand. I began holding a thicker pen differently, which eases any cramping. And, I do small exercises to bring back my strength. Some things, I had to learn to do with my other hand, such as brushing my teeth.
The third thing I did was to give myself time. Healing takes time. It’s been a couple of years since the pain started. Now, it doesn’t hurt too much. I get an arthritic ache when it rains, and recently, that has lessened.
I figure I probably have another year of recovery. And, after that, I’ll still have to do things differently and be careful with it—exactly how I manage my knees.
My writing now is a bit sloppier and I am writing larger. But, I am writing. Physically writing. Sure, I take breaks. I need to. I can’t overdo. Or else, I’ll go backwards.
I’m on a path of tiny steps. I walk it happily.
typing writing

Popular posts from this blog

March 23, 2019
It's spring, or so the calendar tells me.  The weather hasn't made up its mind yet.  Such is life in Southwestern Pennsylvania. I'm sharing an excerpt of the detective story I've been intermittently writing with my fantasy series.  This story takes place in present day, has no portals to magical worlds, and is currently titleless. Here is an introduction of something different.  From the first page: Rain pattered Zia’s umbrella while the cold, spring air made her arm ache.  She thought nothing could be worse than Pittsburgh’s winter for her mending bicep.  Then, Pittsburgh’s spring came.  Tucking the umbrella’s rod between her neck and shoulder, she rubbed her upper arm.  Her pace increased as she peered at the six story red brick building—the only legally occupied building in one of the forgotten, dilapidated sections of the city.  She hurried inside, hoping its warmth would ease the pain. An original to the building, out of commission, peeling paint metal
Read more

7 Things to Do While Social Distancing 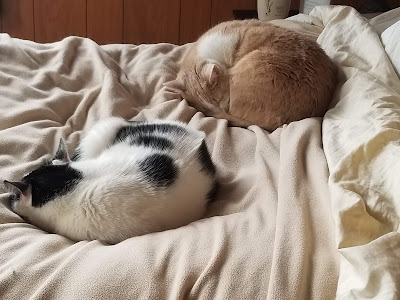 Cats don't understand how distancing works Many of us in the US are going into our second week of quarantine / social distancing.  Places we normally go aren’t open.  And you can only binge so much streaming movies and tv.  What else is there to do?  As someone who normally spends her time socially distancing, I have a few suggestions. 1. Read Books Of course, this will be my number one.  My local library, although physically closed, still has their online lending of ebooks available.  Check your local library system for similar programs. Baen Books has a free library . Smashwords is offering discounts on ebooks via their Author Gives Back program. And, all my ebooks are free on Smashwords through 30 April 2020.  Use coupon code NK58T 2. Play Video Games Use this time to start a new game or finish old games.  Spend countless hours on games like Skyrim doing favor quests so you can become Thane of each hold or picking every ingredient to make a potion y
Read more

That Numb Feeling All Over Again 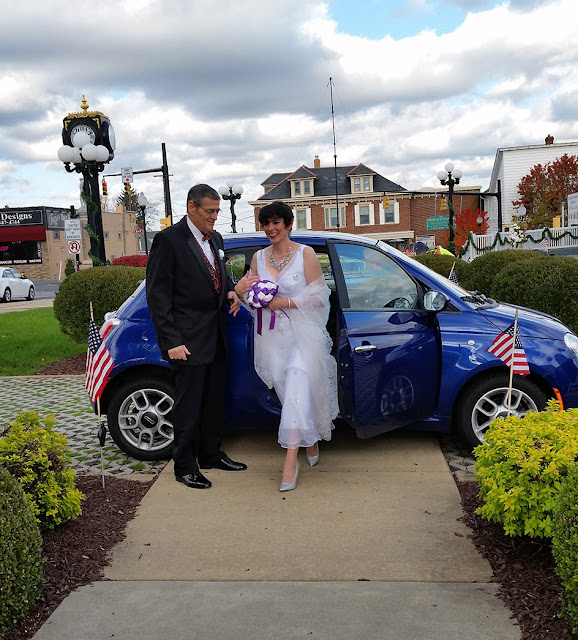 Daddy and Me I lost my father last week to a cascade of medical complications over the past four months.  I feel as though I’ve just gotten off a too fast, yet too long roller coaster—wobbly, shaken on the inside, and numb. My daddy had this way about him.  Gentle, good, and kind.  He relished the little things like ricotta nestled in his plate of rigatoni, a dog wanting petting from him, or sitting on the porch during the rain. We would talk about stuff, big plans, little plans, it didn’t matter.  He made it all feel important and gave his advice.  We’d cook together, clean together, do projects together.  My husband and I would take him to local festivals and shops and wherever.  We enjoyed his enjoyment—his celebration of life. He instilled that same celebration of the important things in me.  I know that when I take the time to savor a type of candy we both favored that a part of him will survive and be with me.  Right now, I miss the corporal—the smiles, the si
Read more